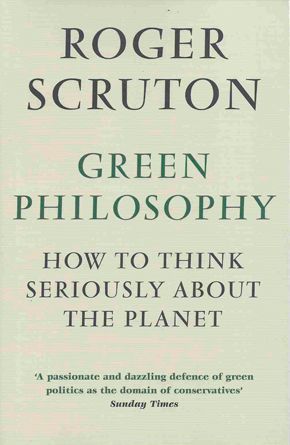 The environment has long been the undisputed territory of the political Left, which has seen the principal threats to the earth as issuing from international capitalism,

consumerism and the over-exploitation of natural resources.  Green Philosophy shows the fallacies behind that way of thinking, and the danger that it poses to the ecosystems on which we all depend. The book sets out the principles that should govern our efforts to protect the environment. The current environmental movement directs its energies at the bigger picture but fails to see that environmental problems are generated and resolved by ordinary people.

Join us on Friday 23rd October at 2pm for the second in our series of virtual book club meetings.    What to read: Conversations with Roger Scruton, and I am delighted...

Before & After Scruton, The European Conservative - 17 Aug 20

I usually jest that my life divides into two parts: ‘Before Scruton’ and ‘After Scruton.’ My first five books were devoted to Søren Kierkegaard, Jacques Derrida, ethics, and postmodern theology....

Very few of us will ever be referred to in the adjectival form. Yet Roger Scruton (1944-2020) deserves such an appellation, and as early as 1985, “Scrutonian gusto” appeared in...

Scruton’s housing vision is finally being realised - The Spectator, 10 Aug 20

The government’s white paper on planning reform makes frequent reference to Roger Scruton and his Building Beautiful Commission – on which I worked as Scruton’s research assistant. If Scruton had lived to...

Bloomsbury (2009) Roger Scruton is one of the outstanding British philosophers of the post-war years. Why then is he at best ignored and at worst reviled? Part of the reason...

Wagner's Parsifal: The Music of Redemption

‘Wagner’s Parsifal – The Music of Redemption’  This short but penetrating book, by a writer who was uniquely both a leading philosopher and musicologist, shows us how Wagner achieves this...

Souls in the Twilight

Beaufort Books  (October 2018) As the lights that have guided us go out, people begin to wander in the twilight, seeking their place of belonging. In these stories, set in...